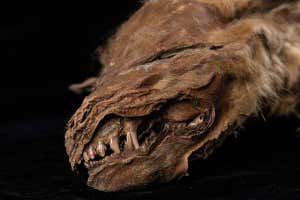 ONE wolf puppy believed to have lived about 57,000 years ago and found perfectly preserved in Canadian permafrost, has provided scientists with a wealth of information about its life and the ecology of the species.

The mummified puppy was found in thawing of permafrost in Yukon, Canada, by a gold digger in 2016 and then handed over to Julie Meachen at Des Moines University, Iowa, and her team for analysis. Freezing temperatures can preserve the organs and tissues of a dead animal and mummify it.

“I have never seen such a well-preserved mummy before,” says Meachen. “I was over the moon and so excited when I was asked to work on it.”

The mummy’s fur, organs and bones are all well preserved. The researchers found that the puppy was female and weighed just under 700 grams. They estimate she was seven weeks old when she died, at the same age as most modern wolves become independent of their mothers. The puppy has been named her Zhùr, meaning “wolf” in Hän, a local first national language.

The researchers used DNA analysis and carbon dating to determine that the puppy lived about 57,000 years ago during the last ice age, a time when ice and mountain ice were widespread throughout the earth. Meachen says that wolves during this period typically eat musk oxen and reindeer, but when the researchers analyzed Zhùr’s diet, they found that it mostly consisted of fish, particulalyr salmon. This suggests that the puppy and her mother hunted in rivers during her short life, a behavior still seen in modern wolves in this area during the summer months.

The team found that Zhùr’s genome has connections with an ancient species believed to be the common ancestor of all modern gray wolves (Canis lupus). “Wolves from the Zhur part of the world seem to have replaced most of the local wolf populations in Eurasia and America,” said Liisa Loog at the University of Cambridge.

How Zhùr died at such a young age is also a mystery. “There is no evidence that she starved to death and there is no physical damage to her body,” Meachen said. Instead, she suggests the puppy was buried in its cave when the entrance collapsed while her mother and siblings fled.

Though discoveries of mummies as these are good resources for studying the past, Meachen says such findings are only possible because the permafrost melts when the world is warmed by climate change. “It’s a double-edged sword,” she says. “You are excited and terrified at the same time.”

Want to get a newsletter on animals, plants and the other strange and wonderful inhabitants of the earth? Register your interest and you will be one of the first to receive it when it starts.