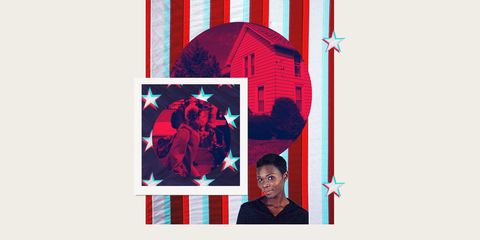 On May 25, I cried when I saw the video of George Floyd. I had never mourned for a stranger as I did that day. He could have been one of my four brothers.

I grew up in a Nigerian-American, ultra-disciplinary Christian home in the Bronx, where the maxes worked hard and loved your neighbor as yourself. There was no talk of our skin color. We only knew that Mom had three jobs – picking up shifts at different hospitals – and all she asked us to do was do well in school and respect our seniors. Simple. We never discussed race or class division. Or how to deal with discrimination. Or what to do when someone bumped into my hair for fun. At one point, it was everyday for me: walking around with African threaded natural hair.

I had thought, as Mom had brought us up, that if I gave the world what I wanted, if I worked hard and tried to be a better person every day, it would somehow work out in the end. Somehow I get all that back.

There is this scripture in the Bible, in the book of Matthew, that talks about wool being pulled over someone’s eyes. It warns against being deceived by what you perceive in that state, for when the wool is removed, you would finally see things for what they really are. You will no longer be misled. That’s how it felt. No matter what, out in the real America, it hit me that it would not mean how good a person I worked to become. None of that matters. My inherent value, according to these United States of America, would always be blocked by my skin color.

The rage that rose up inside me was imprinted on me for several weeks. As obvious as it looks now, I realized that America has never lived up to its name for centuries – there has never been unity in this country. The United States of America. The discrepancy persists. The Trump presidency only revealed and encouraged racial and class division. In the past year alone, we saw an increase in the once noticeable deviation in perspectives and realities.

Out in the real America, it hit me that it would not mean how good a person I worked to become. My inherent value, according to these United States of America, would always be blocked by my skin color.

Insecurity and sense of conflict in one of the country’s deepest moments of calculation, amplified by a violent virus that haunts people especially like me, the gravity of the moment shook me. Even more so when I thought of my mother out there every day in the front lines – a black immigrant woman who daily cared for who came in through the doors. To take several shifts and jump between her OB / GYN unit and the ICU. Outside this hospital, Mom was just another black face. A wrong police stop, a wrong place, the wrong moment, and that could be it. Her dedication, her sacrifice, her kindness – insignificant.

In this place of grief and deliberation, I wondered who I was in this country as a black immigrant woman. Was I just a symbol, an accessory to the white spaces I had occupied? I wondered how the many others were doing. What about white America, how did they see the situation of marginalized groups?

What were their race experiences and attitudes in present-day America?

With a backpack and an oversized MZ handbag, two boxes of blue surgical masks, a box of gloves, plenty of hand sanitizer and three face shields, I headed to the road on September 12th. I traveled by plane and car with four rentals, to 30 states in 32 days. Traveled 13,559 miles. Twelve flights, 23 gas stations, 16 hotels and a bed and breakfast (in Stuart, Nebraska). I drove a black Buick Encore, a red Mini Cooper Countryman, a blue Hyundai Venue and a black Kia Forte.

I met more than a hundred people. Then I recounted the parts of their stories they revealed to me, and my story of discovery. Some of them felt empowered. Others felt that America was built and would continue to flourish on an inconsistent class system.

A couple clung to a belief in the ideology of a united America where true justice could one day exist and differences would belong to the past.

Editor’s note: ELLE.com will publish the rest of Rita Omokha’s story in the coming weeks. This story was funded by Pulitzer Prize-winning travel scholarship.

Rita Omokha
Rita Omokha is a freelance writer based in New York who writes about culture, news and politics.