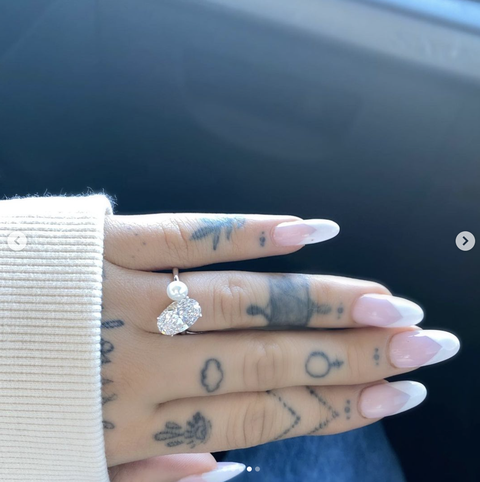 Ariana Grande is getting married. The singer announced on her Instagram this afternoon that she and Dalton Gomez, who were first seen together in February, are engaged. The singer showed his pearl and diamond ring from him and wrote: “forever n saw some.”

Grande has kept his relationship with Gomez, a Los Angeles real estate agent, largely private on purpose. In April, she wrote, “Sharing special things in your personal life that make you happy on the Internet can be really traumatic. I know I’ve taken a step back from doing so to protect my loved ones and myself.”

But she has shared glimpses of their lives here and there on Instagram, last sharing a kissing picture of them in early December. The two have been quarantined together, and Grande suggested she and Gomez were serious about her songs. “POV” (“I want to love me (Ooh) / The way you love me (Ooh) / Ooh, for all my beautiful / And all my ugly too / I would very much like to see me from your point of view”) and “Positions” (Heaven sent you to me / I just hope I do not repeat the story / Boy, I’m trying to meet your mother one Sunday “).

The couple were first seen together around Valentine’s Day, though Gomez was not identified at the time. It is unclear how long Grande and Gomez were together before their first observation in February. When TMZ confirmed Gomez’s identity in late March, sources were told the two had been together privately for “several months.”

But there have been reports that Grande and Gomez are really very serious. In late August, a source told Us Weekly that “Ariana sees something different in Dalton that she’s never seen before in guys she’s dated before.” Outlet added that they “have fallen wildly in love with each other.”

“He’s the type of guy she’s been looking for,” the source added. “He is very protective of her, will go out of his way for her and do small things that are chivalrous. Dalton will do anything to meet her needs. ”

Alyssa Bailey
News and Strategy Editor
Alyssa Bailey is the news and strategy editor at ELLE.com, where she oversees celebrity and royal coverage (especially Meghan Markle and Kate Middleton).