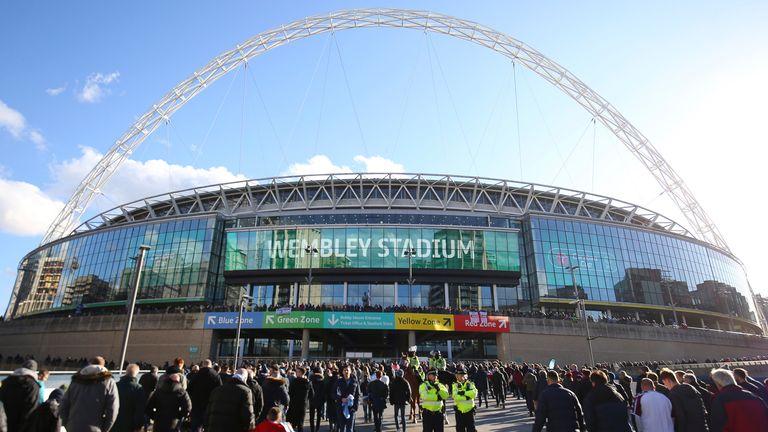 Fans are set to return to sporting events from Monday, May 17 as Prime Minister Boris Johnson outlined his road map for easing coronavirus lockdown restrictions.

Supporters have been prevented from attending sporting venues across England since the scrapping of the tier system in December.

However, the Prime Minister has now revealed plans in the House of Commons to ease restrictions step-by-step across the whole country simultaneously instead of on a regional basis.

Under the proposals, it would mean the final weekend of the Premier League season, set to be played on Sunday, May 23, could potentially be played in front of a limited number of fans.

With Manchester City top of the league, 10 points clear of second-placed Manchester United, supporters could see Pep Guardiola’s side lift the Premier League trophy against Everton at the Etihad.

Although the FA Cup final is set to be played on Saturday, May 15 – two days before the initial plans to allow fans to return, it could be used as a test event.

Which clubs will be at Wembley?

Eight teams are left in the FA Cup. The quarter-finals will see Leicester vs Manchester United, Chelsea vs Sheffield United, Bournemouth vs Southampton and Everton vs Manchester City.

Sky Sports News reported last week the FA and EFL were working with the Government to get fans inside Wembley for the two showpiece finals of the FA and Carabao Cups.

It is hoped to have one-third of Wembley full of spectators by the time the finals are played, in late April and mid-May, providing it is safe to do so.

The EFL has already moved the Carabao Cup final from February 28 to April 25 to give it the best chance of having supporters inside Wembley.

Both finals have been identified as key milestones for the wider game, and – crucially – ahead of this summer’s Euros.

And with Wembley set to host seven matches at this summer’s delayed Euro 2020, including all three of England’s group games, a last-16 clash, both semi-finals and the final, Monday’s announcement is seen as a positive step for fans to attend.

Non-elite sport in England to resume in March

The Prime minister has also revealed non-elite sport – including grassroots football – can resume in England from March 29.

Johnson also confirmed schools in England will reopen to all pupils on March 8, with children’s after-school sports and activities also allowed to resume.

On the same date, outdoor recreation with one other person will also be permitted, meaning people will be allowed to sit together in a park with a coffee, drink or picnic.

However, adults will have to wait a further three weeks to restart organised sports, with grassroots football set to resume along with the reopening of tennis courts, golf courses and other outdoor sport facilities.