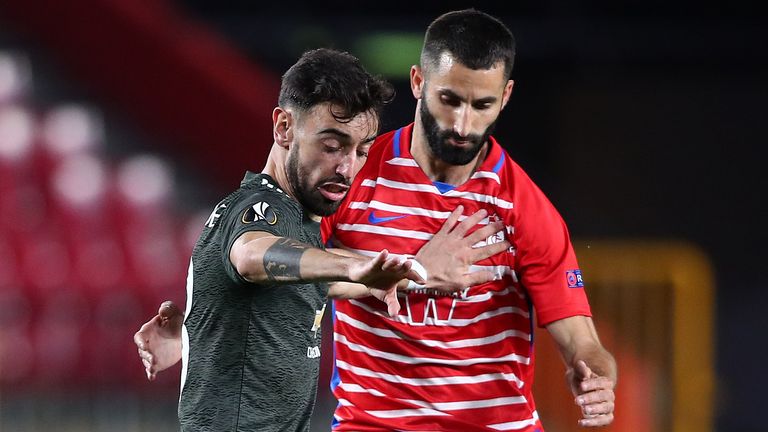 Rashford notched his eighth European goal of the season on 31 minutes with an exquisite control and finish from Victor Lindelof’s pinpoint diagonal, before Fernandes secured a two-goal cushion with a late penalty after he was struck in the face by defender Yan Brice.

The streets were lined with supporters as the teams arrived at the stadium for what was arguably the biggest night in Granada’s history as they participated in a European quarter-final for the very first time – but despite drawing the returning David de Gea into a number of routine saves – the La Liga club rarely threatened United.

The victory leaves United in pole position to progress into the Europa League semi-finals in next Thursday’s return at Old Trafford, though Ole Gunnar Solskjaer’s side will have to finish the job without captain Harry Maguire, Scott McTominay and Luke Shaw, who are all suspended after picking up yellow cards.

Man of the Match: Marcus Rashford

Granada flew out of the traps but United’s main concern after the hosts’ blistering start had subsided was the fitness of Rashford, who having been passed fit enough to start looked to be in some discomfort and nursing an injury in the opening quarter of an hour.

United quickly assumed control of the contest, restricting Granada to the odd sight of goal. On-loan Chelsea forward Kenedy blazed a volley over from tight angle and former Spurs striker Roberto Soldado lashed a shot into the side-netting, but from the next passage of play the visitors got that crucial away goal.

Lindelof’s sumptuous 70-yard diagonal was latched onto by Rashford, who produced a flawless first touch before allaying any lingering fitness concern with a composed finish past the on-rushing goalkeeper into the corner.

United switched off from a free-kick and nearly paid the price five minutes before the break, but the woodwork came to their rescue as on-loan Manchester City midfielder Yangel Herrera’s cross-shot cannoned off the post.

McTominay and Shaw picked up bookings in quick succession which will rule them out of next week’s return leg at Old Trafford for fouls on Antonio Puertas, but that was the only blow Granada could place on United before the break, with Kenedy’s volleying a crisp effort into the arms of De Gea.

De Gea was called upon early in the second half to prevent another effort from Kenedy from swerving into the bottom corner before Maguire fizzed a shot wide after shimmying his way into space in midfield.

Edinson Cavani replaced Rashford for the final 25 minutes as Solskjaer looked to secure a more handsome first-leg advantage. Fernandes very nearly delivered a second away goal six minutes from time, only to be denied by the outstretched arm of Granada goalkeeper Rui Silva.

With the seconds ticking down Granada would have settled for a one-goal deficit – but the size of their task increased in the final minute when Brice was adjudged to have struck Fernandes off the ball in the area – and the Portuguese squeezed the penalty past Silva to leave United in the driving seat.

Manchester United travel to Tottenham on Super Sunday at 4.30pm – live on Sky Sports Premier League – and Granada head to Valladolid in La Liga on Sunday at 5.30pm. United then host Granada in their Europa League quarter-final second leg at Old Trafford on Thursday at 8pm.