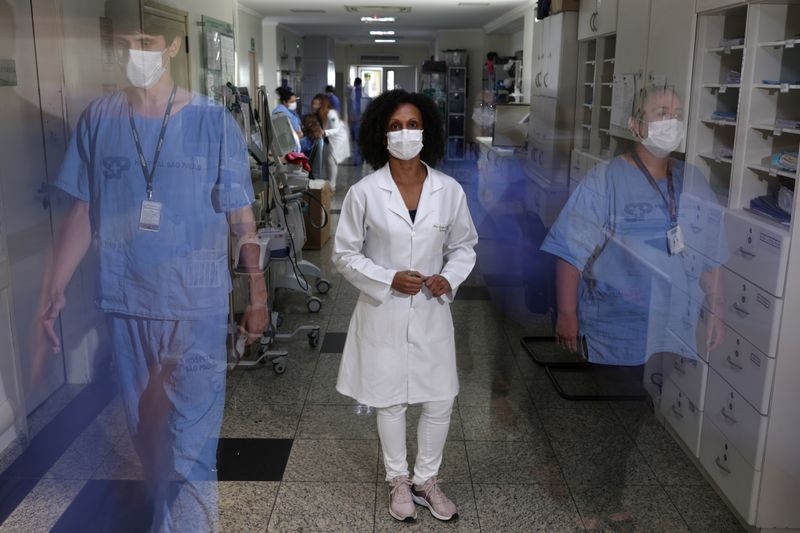 © Reuters. The broader picture: In Brazil, voluntary vaccine trials are hoping to save lives

SAO PAULO (Reuters) – From doctors tired of watching patients die to relatives who lost loved ones, thousands of Brazilians have volunteered for COVID vaccine trials in one of the world’s worst affected countries, hoping that their silent heroism will save lives.

Latin America’s largest country has become a major test site for vaccines due to the scale of its outbreak, which has seen more than 7.3 million people infected and over 180,000 killed by coronavirus.

Denise Abranches, 47, dental care coordinator at a Sao Paulo hospital, was the first volunteer outside the UK to receive the trial vaccine from AstraZeneca (NASDAQ 🙂 Plc.

“This global effort by volunteers in search of a vaccine will be remembered and will go down in history,” she said. “The love movement from volunteers. That’s how I want to be remembered.”

While President Jair Bolsonaro, widely condemned for his handling of the pandemic, has vowed not to take any coronavirus vaccine, even if it is approved by Brazil’s health authorities, many volunteers are convinced that vaccinations are the only way to end the crisis.

Some, like Monica Aparecida Calazans, a Brazilian nurse who participated in the Sinovac trial, felt a personal obligation to contribute.

“My brother, who is 47 years old, had COVID-19,” she told Reuters. “If I do not take the vaccine, we will never know if it works or not. For him, but also for everyone else, I wanted to take part in the trial.”

The biomedical center that runs Sinovac’s late trial in Brazil, the Butantan Institute, said on Wednesday that the vaccine reached the 50% threshold for efficacy set by Brazilian health regulator Anvisa. It promised to release more detailed information within two weeks as part of global trials.

Bolsonaro, a right-wing nationalist who is an outspoken critic of China’s influence in Brazil, has opposed Sinovac’s vaccine for political reasons.

More broadly, he has tried to limit lockdown measures and minimized the severity of the virus, actions that critics say have increased its spread and the death toll among Brazil’s 210 million people.

Amid the severe economic impact and a shaky political response, some volunteers said the opportunity to participate in the trials gave them a sense of regaining control of their own destiny.

Trial volunteers usually do not know if they are getting the actual vaccine or placebo, which means that even though the vaccines ultimately succeed, they may not have been protected against the disease all this time.

Some drew on what they said were mild side effects from the inoculation.

“The first few days after I took (the vaccine), I had a few symptoms – tremors and pain in my body,” said Antonia Santos, a nurse who participated in the AstraZeneca trial. “My daughter was desperate. She said ‘Mom, you’re crazy.’ I said, ‘No, it would not be crazy to take it.’ “