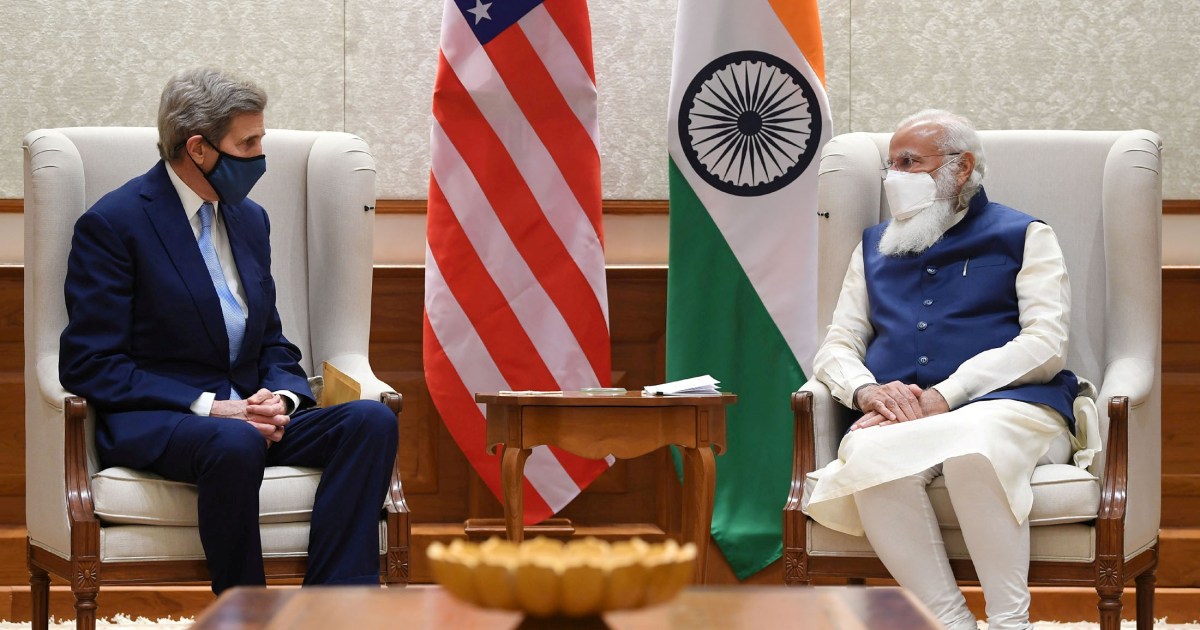 Indian PM tells US climate envoy New Delhi is committed to meeting pledges under 2015 Paris climate change agreement and that it is on track to meet them.

Indian Prime Minister Narendra Modi has told the United States’s climate envoy, John Kerry, that India was committed to meeting its climate change pledges and Kerry said the US would support those goals with affordable access to green technologies and financing.

India’s foreign ministry disclosed their comments after the two met on Wednesday in New Delhi.

Modi said cooperation between India and the US, particularly on financing innovation and faster deployment of green technologies, would have a positive effect on other countries, according to the statement.

Modi told Kerry that India was on track to meet its pledges under the 2015 Paris climate change agreement.

Kerry, the special presidential envoy for climate, said he spoke with Modi about how the US could help mobilise finance by bringing “concessionary finance” to the table to reduce India’s risks in dealing with first losses on the transition to clean energy.

Then the US could “bring more money to the table for a normal commercial investment that could quickly start producing alternative fuel,” said Kerry, speaking in an International Monetary Fund seminar from New Delhi.

Environment Minister Prakash Javadekar recently said India already has achieved 21 percent of its pledge to reduce its greenhouse gas emissions per unit of economic output by 33-35 percent by 2030.

The Paris accord aims to keep the increase in average temperatures worldwide “well below” 2 degrees Celsius (3.6 degrees Fahrenheit) compared with pre-industrial levels.

Scientists have said that any rise beyond 2 degrees Celsius could have a devastating effect on large parts of the world, raising sea levels, stoking tropical storms and worsening droughts and floods.

During her meeting with Kerry on Tuesday, India’s Finance Minister Nirmala Sitharaman underscored the need for developed countries to keep their $100bn annual commitment in funding for developing countries so they can take significant steps to address global warming.