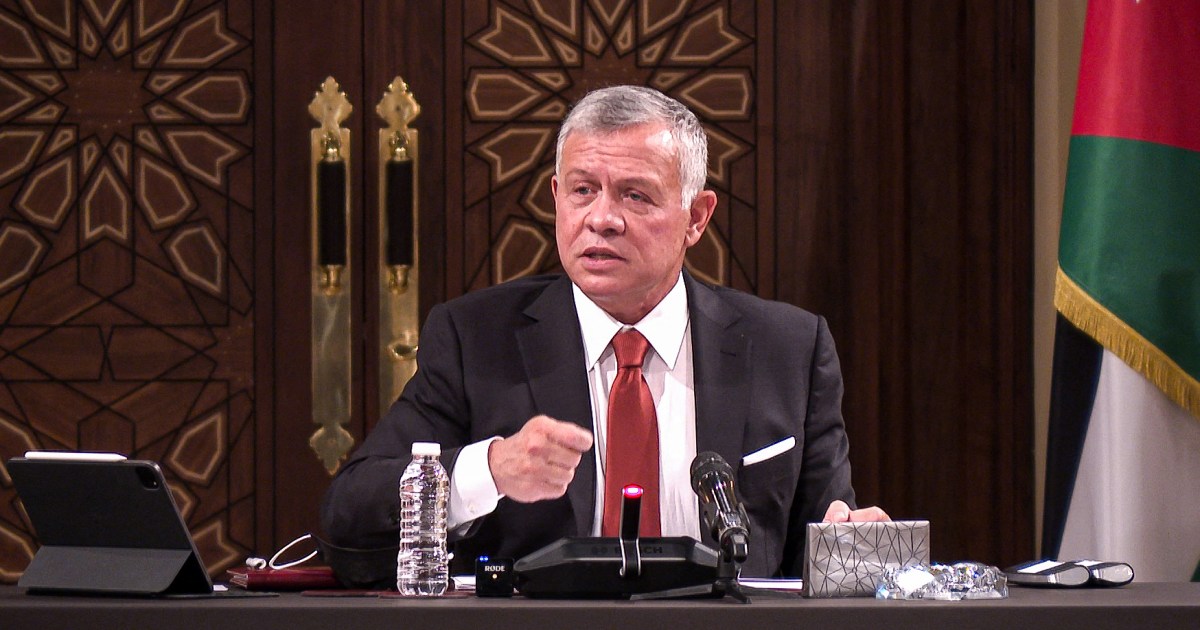 In first statement since political crisis, King Abdullah says Prince Hamzah is ‘in his palace under my protection.’

Jordan’s king Abdullah has addressed the rare public rift within the royal family for the first time, saying the “sedition” that caused him anger and pain has been buried.

In a statement broadcast to the nation on Wednesday, the king addressed Jordan’s worst political crisis in decades, sparked by an alleged plot involving his half-brother Prince Hamzah.

The crisis in the royal family erupted during the weekend, when Jordan’s military chief of staff visited Prince Hamzah and warned him to stop attending meetings with critics of the government. Things quickly escalated, with Hamzah accusing the security establishment of threatening him and ordering the general to leave his home.

The former crown prince said he was then held under house arrest, and authorities detained 18 other people, including former senior officials.

The government accused Hamzah of being part of a “malicious plot” to destabilise the country with foreign support, but the following day, it said the royal family had resolved the dispute.

What did the king say?

“I assure you, that the sedition has been nipped in the bud,” King Abdullah said in an address read out on state television.

The monarch went on to say that Jordan is accustomed to facing and triumphing over challenges.

“Over the course of our history we have defeated all the targets that tried to undermine the homeland, and we came out of them stronger and more united,” he said.

“The challenge of these last days was not the most dangerous for the stability of the country – but it was the most painful for me”.

“Hamzah today is with his family in his palace under my protection,” King Abdullah said.

“He has committed before the [Hashemite] family to follow the path of his parents and grandparents, to be faithful to their message, and to place the interest of Jordan, its constitution and its laws above all other considerations.”

Abdullah said an investigation will be carried out in accordance with the law, and that the next steps will be governed by “the interests of the homeland and of our loyal people”.

The palace had already insisted the dispute was being resolved inside the family, but major challenges loom for the Western-allied monarchy long seen as a linchpin of regional stability.

The whereabouts of Prince Hamzah are unknown and there is no sign that authorities have released the other 18 detainees, including members of one of the powerful tribes that has historically supported the monarchy.

Authorities have meanwhile imposed a sweeping gag order on reporting of the alleged plot, in a sign of the sensitivity of how the dispute is perceived.

A major internet provider was down for several hours on Wednesday and residents in the capital, Amman, reported seeing military aircraft and helicopters overnight.

“People are not sure what’s happening to them,” a 28-year-old resident said via secure internet line, speaking on condition of anonymity because of the media gag order. “This is terrifying.”

Jordan was already grappling with an economic crisis exacerbated by the coronavirus pandemic, with one in four people out of work. Longstanding complaints about corruption and misrule have driven scattered protests in recent months.

“The dispute with Prince Hamzah shows that the kingdom can no longer use its international standing as a mediator in regional conflicts and bulwark of security for the West without addressing growing economic and political challenges at home,” said Tuqa Nusairat, an expert at the Atlantic Council.

“Jordanians have been consistently expressing concerns over the direction of the country, including publicly protesting,” she added.