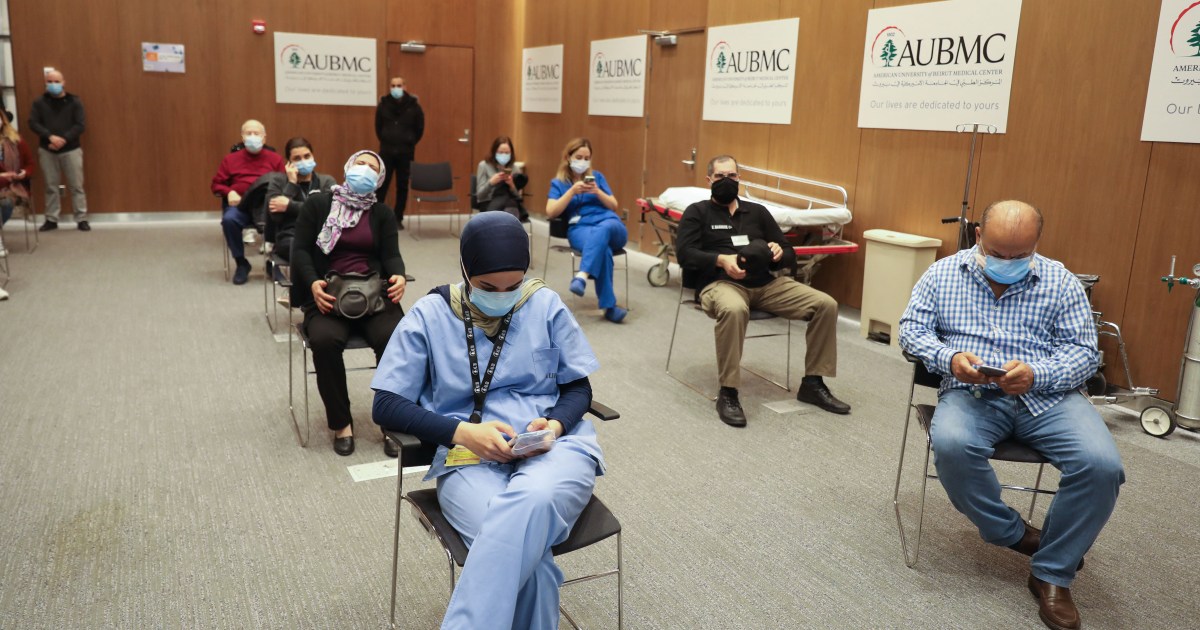 The World Bank has threatened to suspend financing for coronavirus vaccines in Lebanon over what it said were violations by legislators who were vaccinated inside Parliament.

The comments by the international lender on Tuesday came as frustration grew among some residents and doctors that the national plan that requires people to get vaccinated at predetermined centres could be riddled with violations and favouritism.

Lebanon received its first batch of the Pfizer-BioNTech vaccine – 28,000 doses – this month with financial aid from the World Bank, which said it would monitor to ensure the shot went to those most in need. In its first operation funding the purchase of COVID-19 vaccines, the lender reallocated $34m to help Lebanon inoculate more than two million people.

Parliament’s Secretary-General Adnan Daher was quoted as saying by local media that 16 deputies as well as four parliamentary staff, all aged above 75, had received a COVID-19 jab inside the legislature. He insisted they were all registered for the vaccine with the health ministry, and had not broken any rules.

But the World Bank said it broke the terms of the agreement with the government.

“We would record it [as a] breach of terms and conditions agreed with us for fair and equitable vaccination,” Saroj Kumar Jha, World Bank regional director, said on Twitter. “Everyone has to register and wait for their turn,” he added.

“Upon confirmation of [a] violation, [the] World Bank may suspend financing for vaccines and support for Covid-19 response across Lebanon,” Jha said.

Head of COVID-19 vaccination committee Dr. Abdel Rahman al-Bizri: vaccination of MPs “violation that cant be tolerated”; hurts people’s trust in campaign.We cant ask those in 80s, 90s to wait for turn & go to centers while others vaccinated at workplace in violation of priorities

The reports raised anger in a country where many have lost faith in the corrupt political class blamed for many of its woes.

“My mom is 84 she is registered and didn’t [have] her turn yet, while all the politicians, [their] families and friends will be vaccinated before her,” said one Twitter user.

Abdel Rahman al-Bizri, who heads the committee supervising the vaccination campaign, had planned to resign in protest on Tuesday but changed his mind, saying his committee will hold a meeting on Wednesday to follow up the case. He added that an explanation is needed from the legislature.

“What happened today is outrageous and should not be repeated,” al-Bizri said at a news conference. “I am not responsible for this breach but I will apologise for it,” he was quoted as saying by the local Daily Star newspaper, saying the breach threatened to undermine people’s trust in the vaccination programme.

There was no immediate comment by the health ministry.

An MP said current and retired lawmakers older than 75 years, as well as some administrative staff, were getting vaccinated in the parliament hall. “What’s the big deal? They’re over 75 and registered,” the MP was quoted as saying by The Associated Press news agency.

In January, Lebanon’s government launched a digital coronavirus vaccination registration platform for people in the country.

The World Bank and the International Federation of the Red Cross and Red Crescent Societies have signed an agreement for independent monitoring of Lebanon’s coronavirus vaccination campaign.

The vaccination campaign began on February 14 and Lebanon has so far received nearly 60,000 doses of the Pfizer-BioNTech vaccine. Some 17,000 people have had their first injection, according to health officials.

“There were many violations that took place at vaccination centres,” said Sharaf Abu Sharaf, president of Lebanese Order of Physicians. He added in a statement that violations included vaccinating people who were not registered or not included in the first phase of the campaign.

Lebanon, a country of six million people including a million Syrian refugees, has registered more than 356,000 coronavirus cases and 4,387 deaths since the first case was registered in February 2020.