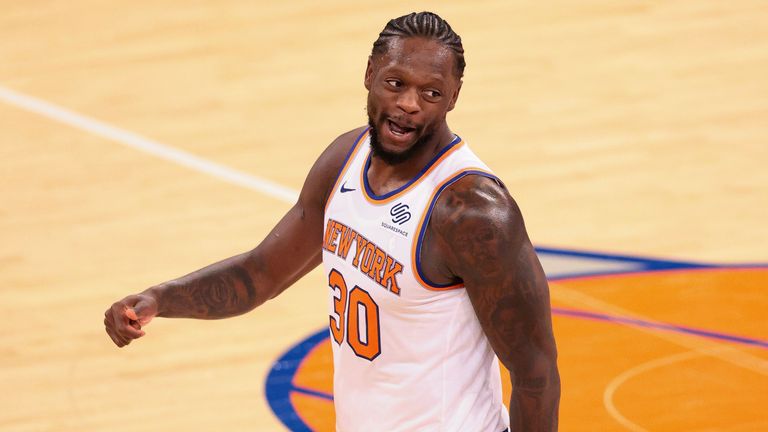 Host Jaydee Dyer is joined by three-time NBA champion BJ Armstrong and Sky Sports analyst Mo Mooncey to chop up all the news and storylines from around the NBA.

We begin with the latest news: DeMarcus Cousins joins the LA Clippers on a 10-day contract, Isaiah Thomas returns to the NBA with the New Orleans Pelicans on a similar deal and former Pistons and Magic legend Grant Hill has been announced as the new managing director of USA basketball after the Tokyo Olympics.

In Hot or Not the takes come thick and fast, with BJ and Mo discussing Jrue Holiday’s $160m contract extension with the Milwaukee Bucks and whether it actually improves their title chances all that much.

BJ makes the case that Julius Randle deserves to be crowned Most Improved Player this season, while Mo makes the case for Zion Williamson, who has been putting up historic numbers since being gifted ball-handling duties by Pelicans coach Stan Van Gundy.

Whilst Julius Randle is the clear frontrunner for the Most Improved Player award, @TheHoopGenius shows some love for a certain Zion Williamson 🏀

The next take from a viewer has Mo so fired up even Jaydee starts to feel the heat.

It’s a bold one: the Celtics will never win anything with Brad(ley) Stevens. Unsurprisingly, Mo thinks it is nonsense, although BJ does believe that the Celtics should be held to higher standards than most franchises due to their storied history in the league.

And finally, the trio look ahead to another weekend of basketball as the Nuggets host the Boston Celtics live and for free on the Sky Sports YouTube channel, causing BJ to proclaim that, yep, Denver are now ready to win a title.

We’ll let you, the listeners, decide if that take is Hot or Not.