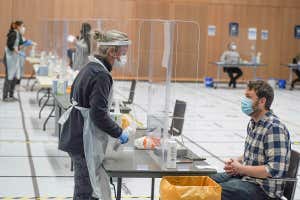 A new type of coronavirus test that is widely used to screen people without symptoms had very low accuracy levels at the University of Birmingham, UK, one of the few places where it was compared directly to a more accurate type of test in a real world setting.

Among students in Birmingham, only 3.2 per cent of those infected with the virus correctly got a positive result from the lateral flow tests used there, according to preliminary data from the university.

This is much lower than previously reported sensitivity levels for this type of test. The sensitivity was 57 percent when used in one mass-screening pilot in Liverpool, UK and more than 70 per cent when it was checked in UK government laboratories, according to a spokesman for the UK Department of Health and Social Care.

The first form of analysis developed for coronavirus, called a PCR test, is more accurate. PCR testing indicates whether the virus’ genes are present and usually offered to people who have symptoms of covid-19. The tests usually need to be sent to a laboratory for treatment and it may take a day or two to produce results.

Lateral flow testing, also called antigen testing, is a recent development. They indicate whether certain viral proteins are present. Similar in design to pregnancy tests for home use, they can produce results in as little as 15 minutes.

Many organizations have begun screening people without coronavirus symptoms to try to prevent infections from spreading without knowing it. They often use lateral flow tests because of their fast results. But concerns have been raised about theirs lower accuracy, especially around the frequency of “false negatives” when someone is told that no coronavirus can be detected when they actually incubate the virus.

The University of Birmingham was one of several UK educational institutions offering lateral flow tests to all its students before returning home for the Christmas holidays. About 7,200 took up the offer during the first week of December, and one-tenth of them, randomly selected, also received a PCR test to verify the accuracy of the lateral flow tests.

The lateral flow tests showed that 0.03 percent of the students had coronavirus. But in the smaller fraction that had a PCR test, the prevalence was much higher, at 0.86 percent, according to numbers put online this week.

It is not known why the sensitivity of the lateral flow test was so low, says the university’s Jon Deeks, who was involved in the screening program. One factor may be that students took their own nasal and throat swabs and may have done this incorrectly, even though they did so under supervision, and many other bodies that offer screening also use self-cleaning.

It can also be an object of the small numbers involved, says Louise Kenny at the University of Liverpool. The PCR positivity level came from 6 positive results among 710 students. “Statistically, it’s pointless,” Kenny says.

The tests are made by the American company Innova Group. A spokesman for the company wrote via email that they are not aware of the data reported by the University of Birmingham. “The low level of efficiency proposed is not something we recognize, suggesting a careful and considered study of the method used would be advisable. When used properly, the Innova test is a highly effective tool for detecting infectious people and enabling proper response to help reduce the spread of SARS-CoV-2 virus. ”

Birmingham’s coronavirus prevalence rates from the lateral flow tests were much lower than those seen at some other British colleges. For example, the University of Portsmouth found a prevalence of 0.2 percent among its asymptomatic students, and the University of Reading, 0.4 percent, according to a BBC report. But Edge Hill University in Lancashire found no positive cases from about 2,100 students, according to the same report. It is unclear whether these other colleges asked students to whip themselves.

Mass screening using lateral flow testing is set to be introduced among all high school students in the UK starting in January. “They should definitely not be used like that,” says Deeks.

Allyson Pollock at Newcastle University in the UK says mass screening using lateral flow tests should not have been widely introduced before being tested for accuracy in the community. “They have not been evaluated outside of a laboratory setting.”

A spokesman for the UK Department of Health and Social Care said via email: “The country’s leading researchers rigorously assessed lateral flow testing and confirmed the accuracy. Our evaluation work and the ongoing pilots help us understand how lateral flow tests work in the field and how we can use them to stop the spread of the virus. ”