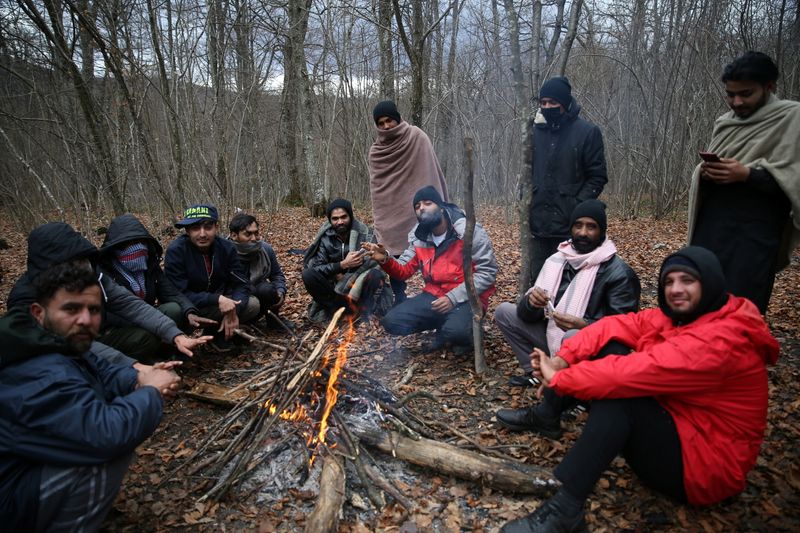 © Reuters. Migrants are trying to warm up near the burned migrant center “Lipa” in Bihac

BIHAC, Bosnia (Reuters) – More than a thousand migrants from Asia, the Middle East and North Africa were allowed to sleep in the cold after their camp in northwestern Bosnia burned down in a dispute among Bosnian politicians over where to house them.

On Wednesday, a fire destroyed the camp in Lipa, which housed about 1,200 people. Police and UN officials have said the fire was likely started by migrants unhappy with the temporary closure of the camp, scheduled for the same day, and uncertainty about where they would be relocated in Bosnia.

Dozens of men spent the night in a damaged metal container near the fireplace, leaving only a ghostly steel structure. Smoke still rose from some burnt spots on the ground Thursday morning.

Other migrants tried to erect nylon tents and slept fully clothed on the frozen ground. Most of them walked through the forest towards the town of Bihac near the Croatian border and avoided areas marked with warnings of landmines left over from the war in Bosnia in the 1990s.

About 10,000 migrants from Asia, the Middle East and North Africa are stuck in Bosnia, hoping to reach richer countries in the European Union.

“I could not sleep last night, I sat all night,” Bylal said from Pakistan, adding that he would wait to see if the government would give them a new shelter.

The Lipa camp, which opened last spring as a temporary shelter during the summer months 25 km away from Bihac, was to be closed on Wednesday for winter renovation. But the Bosnian authorities could not find alternative housing for the residents.

The central government wanted the migrants to temporarily return to the Bira camp in Bihac, which was closed down in October, but local authorities disagreed, saying other parts of Bosnia should also share the burden of the immigration crisis.

“Please open the Bira camp so everyone goes there, it is very good there,” said Yasin, also from Pakistan. “It’s cold here, we can not stay here, we have no food, we are hungry.”

The European Union, which had supported Bosnia with 60 million euros to manage the immigration crisis and promised 25 million euros more, has repeatedly asked the authorities to find an alternative to the unsuitable Lipa camp and warns of an unfolding humanitarian crisis.

“We urge … the authorities to rise above political considerations and temporarily reopen the center of Bira in Bihac,” the EU said in a statement on Wednesday.

Disclaimer: Fusion Media would like to remind you that the data on this site is not necessarily real-time or accurate. All CFDs (stocks, indices, futures) and Forex prices are not provided by stock exchanges, but rather by market makers, and therefore the prices may not be accurate and may differ from the actual market price, which means that the prices are indicative and not suitable for commercial purposes. Fusion Media therefore bears no responsibility for any trading losses you may suffer as a result of the use of this data.

Fusion Media or anyone involved in Fusion Media assumes no responsibility for any loss or damage resulting from reliance on the information, including data, offers, charts and buy / sell signals contained on this site. Be fully informed about the risks and costs associated with trading the financial markets, it is one of the most risky forms of investment.