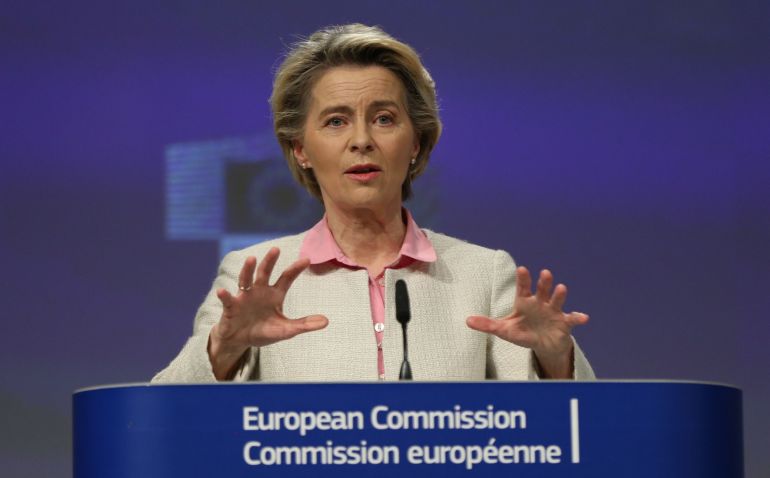 British and EU negotiators closed a Brexit trade deal on Thursday, just a week before Britain finally leaves the orbit of the 27-nation bloc, its largest trading partner.

But unusually among trade agreements, companies will face more bureaucratic obstacles than they did while Britain was a member of the EU.

And many important issues, such as the constraints facing the UK’s large financial services sector on product sales in Europe after the UK leaves EU trade arrangements from 1 January, are unclear.

Remind me, what is Brexit?

Brexit – or “British exit” – refers to the process of Britain leaving the EU after 47 years in the economic and political alliance between European countries built from the ashes of World War II.

Following a referendum that “voting leave camp” won by 52-48 percent in June 2016, Britain became the first country to leave the EU, a union now with nearly 450 million citizens stretching from the Atlantic to the borders between Russia and Turkey.

Britain’s formal departure on 31 January 2020 was heralded by supporters as a restoration of the country’s political sovereignty of 66 million people.

Opponents saw it as a historic setback for European integration that could cause unprecedented economic damage and risk renewed strife at the Irish border, the only land border between the bloc and Britain.

Since its formal departure, London has followed established rules of close co-operation on everything from trade to student exchange, but this transition phase expires at midnight on 31 December.

So what does the new agreement cover?

The two sides have been in complex negotiations since March to try to keep their trade in goods afloat from January 1, 2021.

The agreement, which was announced on Thursday, means that this trade – about half of the 900 billion. Dollar in annual trade between the EU and the UK – remains free of tariffs and quotas.

However, goods moving between the UK and the EU are transported under customs and other controls, and extra paperwork is expected to cause widespread disruption.

The agreement was negotiated on top of a formal withdrawal agreement reached last year, which ensured that comprehensive controls were not put back on the sensitive border between EU member Ireland and the British province of Northern Ireland.

The third key element of the agreement is the division of fishing quotas between the UK and the EU.

What other areas are affected?

The agreement does not presuppose cooperation at the same level as before Brexit in many areas.

Financial and business services, the backbone of UK exports, are only slightly included.

Eg. Is there no decision on so-called equivalence that allows companies to sell their services to the single market from the City of London. The agreement only contains standard provisions on financial services, which means that it does not include obligations regarding market access.

The same applies to cooperation on foreign policy, security and defense, while the provisions for transport, energy and civil nuclear cooperation will be below the current level.

What other bands are downgraded?

Mobile roaming, mutual recognition of professional qualifications, access to legal services, digital commerce and public procurement are other areas where cooperation is being downgraded.

While the EU and the UK agreed not to require travel visas, the free movement of people will cease.

This means that EU citizens traveling to the UK, and vice versa, will be subject to border screening and will no longer be able to use biometric passports to cross quickly through electronic gates.

How would professional services be affected?

The agreement means that there will no longer be automatic mutual recognition of professional qualifications, according to the EU reading the Treaty.

“Doctors, nurses, dentists, pharmacists, veterinarians, engineers or architects must have their qualifications recognized in each Member State in which they wish to practice,” the EU said.

This is a loss for the UK, which had wanted “comprehensive coverage” to ensure there were no “unnecessary” barriers to regulated services. However, the agreement still provides a “framework” for the recognition of qualifications, according to the UK summary of the agreement.

The agreement also includes obligations to maintain a ‘level playing field’. What is it about?

The agreement obliges both parties to maintain their environmental, social, labor market and tax transparency standards to ensure that they do not sign each other.

Both sides will be able to impose tariffs if they differ too much – subject to arbitration.

European companies dissatisfied with any UK state aid to rivals could ask British courts to investigate whether they are unfair, EU officials said.

No set limit for how much state aid is problematic – this is taken on a case-by-case basis.

The UK summary says both sides must be transparent in terms of subsidies; both the EU and the UK need an independent authority to control state aid.

Courts must be able to order the repayment of illegal subsidies. A rebalancing mechanism is included.

So is Brexit finally over?

Yes, because Britain is out of the EU, its customs union and the internal market and no longer bound by their rules. The ties will now be based on the two sides’ divorce settlement in 2020 and the trade and cooperation agreement sealed on Thursday.

But those hoping for an end to the often cumbersome negotiations that followed the Brexit referendum are likely to be disappointed.

The agreement includes transitional periods and review clauses, which means that there are more negotiations on fisheries, trade rules and much more.