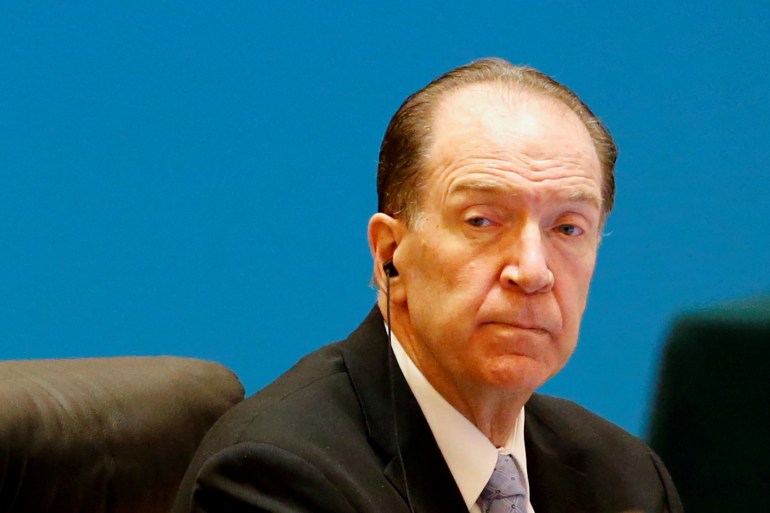 Both the IMF managing director and World Bank president expressed alarm over growing global economic inequality on Wednesday after a second day of their organisations’ spring meetings.

Unprecedented policy response and speedy vaccine development helped pull the global economy back from the brink last year, but the outlook is still marked by severe uncertainty and increasingly lopsided access to wealth and opportunity, the International Monetary Fund’s (IMF) managing director said on Wednesday.

“There is light at the end of the tunnel,” IMF chief Kristalina Georgieva said at a virtual news conference on the second day of the World Bank and IMF’s week-long spring meetings. “This could have been another Great Depression.”

The IMF lifted its global growth forecast to 6 percent in 2021 and 4.4 percent in 2022 on Tuesday. But the upgrade is driven primarily by rebounds in the United States, China and India.

“Economic fortunes are diverging dangerously,” Georgieva said as she presented the IMF’s Global Policy Agenda, which urges governments to ensure people have a fair shot at COVID-19 vaccines, economic recovery and stable futures.

With more economic scarring possible as job losses, bankruptcies, extreme poverty and hunger swell in some countries, Georgieva said that getting back to business requires ramping up vaccine distribution and ensuring that surplus vaccines are transferred to poorer countries.

As countries move past the coronavirus pandemic in the years to come, Georgieva said, governments should gradually scale back support programmes and focus on plans that help rehire or retrain low-skilled workers, young people and women.

Boosting investment in green projects and digital infrastructure both in health and education will require sufficient public funds, Georgieva added, explaining that may lead to progressive taxation and an agreement on minimum taxation for companies and international tax rates.

More external concessional financing and a further extension of the debt service suspension initiative will help poorer countries deal with multi-pronged crises. The IMF has proposed a new Special Drawing Rights (SDRs) allocation of $650bn, which will provide liquidity to poorer countries in the form of an international reserve asset. And demand is high. IMF’s lending to sub-Saharan Africa last year was 13 times greater than the annual average over the previous decade.

World Bank Group President David Malpass also briefed the press on Wednesday, providing an update on his meetings with leaders from three blocs of nations – the G7, G20, and G24 – as well as climate action campaigns and the private sector.

He said the Group of 20 or G20 welcomed the acceleration of the 20th replenishment of the International Development Association – the World Bank’s way ot providing financing for low-income nations, known as the IDA20 process – with the hope that it can be completed by December, which will provide concessional aid and grants to the poorest countries.

The World Bank chief also spotlighted inequality in credit access, noting that people who “don’t have pristine credit ratings” or women wanting to start a business often run into roadblocks.