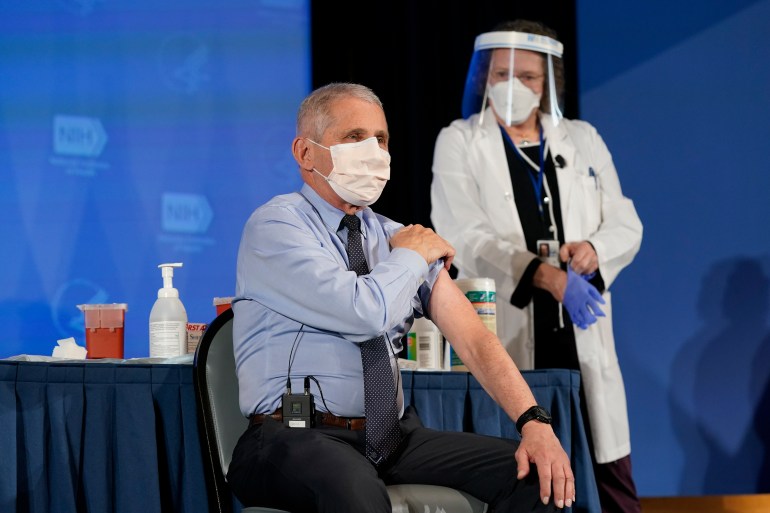 Mayor Muriel Bowser says the day aims to honor Dr Anthony Fauci for his ‘tireless’ work during the COVID-19 pandemic.

As the United States continues to fight the COVID-19 pandemic, the mayor of Washington, DC, has honored the country’s top expert in infectious diseases and declared Thursday as “Dr. Anthony S Fauci Day ”in the US capital.

In a statement, Mayor Muriel Bowser said Fauci, who has been admired by millions of Americans as a tireless warrior during the pandemic, also turned 80 on December 24.

“Dr Fauci has been a hero to our nation during this incredibly difficult year, working tirelessly to save lives and lead our country’s response to and recovery from the pandemic,” Bowser said in a statement on Wednesday.

“I issue this honor on behalf of all Washingtonians in gratitude and recognition of Dr. Fauci’s service to our nation and our city.”

We are incredibly proud to count Dr. Fauci among the many DC residents who sacrifice so much to keep our community healthy and safe. pic.twitter.com/UqvS4sebMf

Fauci, director of the National Institute of Allergy and Infectious Diseases, has served under six U.S. presidents and has emerged as a major source of public health information from the White House Coronavirus Task Force, appearing in live interviews almost daily.

He has also often sparred with US President Donald Trump, who has downplayed the seriousness of the disease. Fauci has insisted on public health measures aimed at curbing the potential spread of the virus.

The United States has reported more than 18.5 million cases of COVID-19 since the pandemic began, according to a number from Johns Hopkins University, as well as more than 327,000 deaths associated with the virus – the highest totals in the world.

Earlier in December, US President Joe Biden elected asked Fauci continues to work for his administration as Chief Medical Officer. Fauci told locals he has accepted the position.

The ceremonial event was broadcast live on television in an attempt to reassure Americans that the vaccine is safe and effective.

“I feel extremely confident about the safety and effectiveness of this vaccine and I would encourage anyone who has the opportunity to be vaccinated so that we can have a veil of protection over this country that would end this pandemic,” Fauci said. before rolling up his sleeve on his blue shirt.

After the injection, he lifted both thumbs up to the cameras.

According to Bowser’s proclamation, Fauci and his wife Christine have lived in DC since 1977.

“We are incredibly proud to count him among the many DC residents who sacrifice so much to keep our community healthy and safe,” the mayor said.