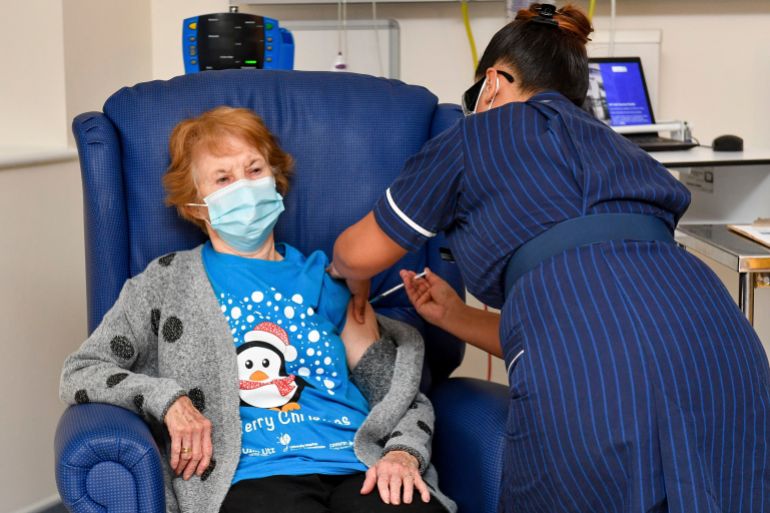 The mass vaccination program to protect humans against coronavirus has been launched globally to combat the pandemic that has killed more than 1.73 million people globally and infected 78 million people since the end of December last year.

Earlier this month, the United Kingdom became the first country in the world to start administering its citizens with a fully tested and tested COVID-19 vaccine, followed by several other nations.

Here is a list of countries that have approved and started administering COVID vaccines to their populations:

On December 8, Margaret Keenan, a 90-year-old British grandmother, became the first person in the world to receive the Pfizer-BioNTech COVID-19 vaccine outside of a trial.

But shortly after the vaccination program was launched, the UK imposed tough lockdown measures after a new and more contagious strain of coronavirus was found.

The first jabs of the coronavirus vaccine for residents were administered in the UAE capital Abu Dhabi on 14 December.

Pfizer-BioNTech has been administered to more than a million people since the program started, even as US authorities approved another Moderna vaccine.

The first COVID-19 patient to be vaccinated in Canada was an 89-year-old woman from Quebec who received the Pfizer vaccine on December 14th.

The North American country, along with the neighboring United States, has also approved the Moderna vaccine for its mass vaccination program. The first shipment of the Moderna shots arrived on Thursday.

Saudi Arabia, the worst-hit country on the Arabian Peninsula with more than 360,000 registered cases, including 6,148 deaths, began its campaign with the Pfizer-BioNTech vaccine on 17 December.

Netanyahu, 71, and his health minister were injected with the Pfizer BioNTech vaccine live on television at Sheba Medical Center in Ramat Gan, near Tel Aviv.

Qatar launched a free coronavirus vaccination campaign after the first batch of the Pfizer BioNTech vaccine arrived in the Gulf state on 22 December.

The vaccine is administered in two doses at three-week intervals at seven primary health centers across the country.

Mexico launched its mass vaccination program on December 24, when a nurse was the first to receive jab in the country with one of the world’s highest COVID-19 deaths.

The TV launch came a day after the first 3,000 doses of the Pfizer-BioNTech COVID-19 vaccine arrived by courier from Belgium.

The Balkan nation launched its vaccine rollout on December 24, with Prime Minister Ana Brnabic becoming the first to receive the Pfizer vaccine.

The country received the first 150,000 doses of the vaccine developed by US pharmaceutical giant Pfizer and its German partner BioNTech.

On December 24, Chile became the second Latin American nation after Mexico to start its inoculation program.

Zulema Riquelme, a 42-year-old nurse, got her first jab in the presence of President Sebastian Pinera.

The Russian government says it has vaccinated its citizens since September with its Sputnik V vaccine.

On August 13, President Vladimir Putin announced that Russia had become the first country to grant regulatory approval for a COVID-19 vaccine.

However, the approval for use was given without the country conducting the Phase 3 trial, which raised questions from world health organizations and researchers.

“I am very grateful to God because I have asked so much about him. My life is very important to me, so take advantage of every moment, ”said Castillo.

Costa Rican President Carlos Alvarado Quesada said the vaccinations “could be the beginning of the end of this pandemic”.

Vimeo gets analyst love, and two traders weigh in on whether it’s a buy