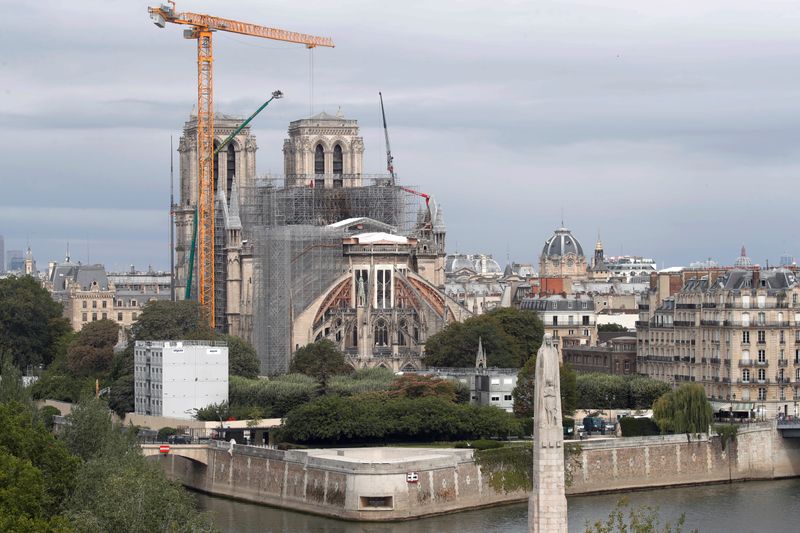 PARIS (Reuters) – For the first time since a fire that nearly destroyed it, the Notre-Dame Cathedral in Paris hosted a choir concert on Christmas Eve, an annual tradition in France.

In an admission that the Gothic cathedral was still being rebuilt, the choristers wore construction hats and boiler suits, and there was no audience.

The concert was recorded in the cathedral earlier this month and was broadcast on French television just before midnight on Thursday.

The choristers performed classical pieces by composers Mozart and Schubert, but also a more light-hearted repertoire, including “Jingle Bells”.

“It was very touching,” said cellist Gautier Capucon, describing the experience of recording the concert. Together with an organist, he provided the choir’s musical accompaniment.

“It was the first time we were all back in Notre-Dame Cathedral since the fire, so it was a moment full of emotion,” he said in an interview with the television station franceinfo.

The cathedral, a landmark of 13th-century Gothic architecture and a major tourist attraction, burned down on April 15, 2019. The fire destroyed the spire and roof.

But to date, most of the work on site has focused on making the building safe, including clearing toxic lead up from the roof and the spire that melted in the fire.

Meanwhile, Notre-Dame is closed to the public and the masses are canceled.

In April this year, seven people were allowed to attend a religious ceremony in the cathedral to mark Good Friday when Christians celebrate the death of Jesus Christ.