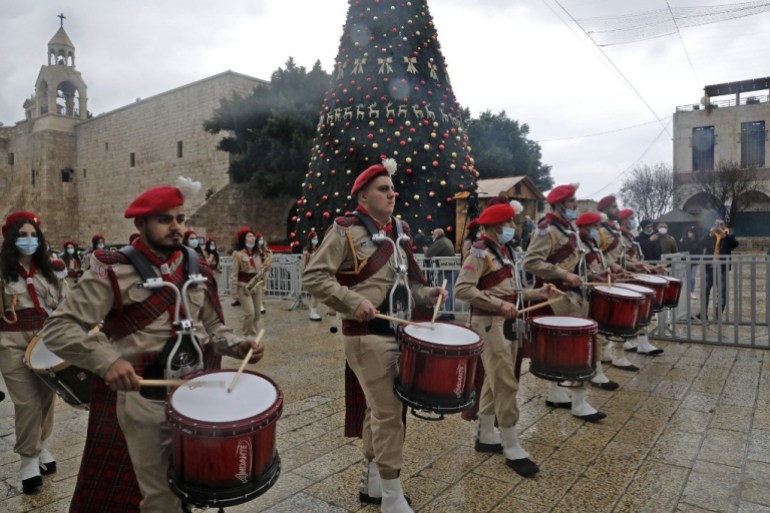 Millions of people have been forced to cancel plans or restrict Christmas parties under the new coronavirus measures after a lot of new outbreaks around the world.

After an abrasive pandemic year that has seen more than 1.7 million people die from COVID-19, Bethlehem, where Christians believe Jesus was born, prepared Thursday for a Christmas unlike any in its recent history.

The Christmas Eve Mass in the Church of the Nativity is traditionally the highlight of a holiday season, with hundreds of thousands of visitors flocking to the Palestinian city on the occupied West Bank.

The mass will be closed to the public this year and will be broadcast online, with only priests and select persons allowed inside the basilica, which was sterilized earlier on Thursday before the service.

A procession of bagpipes and drummers marched towards Manger Square, overseen by a mostly masked Palestinian crowd that lined the streets under gray skies and a bit of rain.

“Despite the fear, the frustration of COVID, we will overcome because Jesus was born in Bethlehem,” the Latin Patriarch of Jerusalem, Pierbattista Pizzaballa, said during the procession.

Participant Jania Shaheen, who was with her two young children and husband on the square, said the holiday was “different this year because we can not pray in the Church of the Nativity”.

“We can not gather as a family, everyone is scared … It is good to see some people here today, but there are none compared to last year. It’s only for people in Bethlehem, ”she told the AFP news agency.

Elsewhere in the region, Kuwait joined other Gulf nations on Thursday to roll out a mass vaccination program against coronavirus, while Mexico across the Atlantic began administering jabs to frontline medical workers.

In Australia – often a rare bright spot to keep the virus at bay – a growing cluster of cases in northern Sydney has restricted residents to suburbs by the sea and led to a ban on all but the smallest Christmas family gatherings.

Jimmy Arslan, who owns two cafes in the epicenter of the city’s eruption, said trade fell 75 percent and his Canberra-based family had been forced to cancel their Christmas visit.

“It’s heartbreaking. It is a very, very sour end to a sour year, “the 46-year-old told AFP.

In Europe, much of the continent endures a dark winter with the resurgence.

Germany has been forced to cancel its famous Christmas markets, and Pope Francis plans to bring the Vatican’s Christmas dinner fair forward by two hours to meet Italy’s exit rules.

In Christmas Eve messages, the pope expressed his desire to visit a crisis-stricken Lebanon and called on political leaders in South Sudan to continue working for peace.

For many, the isolation that has defined the past year will continue until Christmas Day and beyond – as in Belgium, where residents are largely limited to welcoming a single visitor.

In the Catholic majority of the Philippines, some choose to spend the holidays alone because of the risk of catching the virus on public transportation as well as quarantine rules that make travel time consuming and expensive.

“I order food in, reflect old movies and catch up with my family by video,” said Kim Patria, 31, who lives alone in Manila.

Meanwhile, the British were cut off from the shards of the world due to the emergence of a new COVID-19 tribe.

Some UK border restrictions have been temporarily eased during the holidays, but thousands from other European countries are still stranded in England.

“Home for Christmas? Forget it, ”said Laurent Beghin, a French truck driver who delivered his cargo but was still sitting a few days later.

In the United States, more than a million people have been vaccinated, but the country’s coronavirus response remained chaotic as Donald Trump helicoptered from the White House lawn one of the last times in his presidency.

The Republican and his wife Melania were on their way to a vacation at his excellent Mar-a-Lago resort in Florida after his shock rejection of a huge aid package passed by Congress.

The New Year’s party looks downward globally, with lockdowns looming for Scotland, Northern Ireland and Austria through the Christmas period, while Portugal has introduced a curfew for New Year’s Eve.

So far, Sydney still plans to ring in 2021 with its famous Harbor Bridge fireworks display, with New South Wales State Prime Minister Gladys Berejiklian vowing the seven-minute spectacle will continue “no matter what”.

But like most of 2020, people are encouraged to watch TV from their sofas.